Bookish Asia has just posted an interview with my publisher, Earnshaw Books.

Here's the link to the interview.

Posted by Alice Poon at 4:10 PM No comments: Links to this post


For a non-fiction title, this was a riveting and moving read that was not only not dry, but actually managed to transport me like fiction to that shudderingly brutal time and place. As much as there are various military terms and jargon that were confusing to me (not surprisingly), that didn’t take away the enthralling effect the book had on me.

Cornwell’s lucid description of the terrain of the battlefield at the beginning gives a presentiment of what might later prove to be obstructive or facilitating to the British/Dutch army and the Prussian and French armies. The actual battles were fought from July 15 (Thursday) to July 18 (Sunday), 1815, and the minute details of the armies’ strategies and engagements are mostly told from vivid eyewitness accounts, interwoven with the author’s own views of “what-ifs”.

One interesting observation the author makes is the similarity of natural circumstance between the Battle of Azincourt (1415) and the Battle of Waterloo (1815), that is, the rainy weather that turns the battlefield into a big muddy quagmire in both cases. Also, as noted by the author, in both of these fate-changing battles for France and England, the French Army’s outnumbering their enemy is of no help to the former, implying superhuman valiance of the latter. I happened to have earlier read Cornwell’s Azincourt, and understood what he meant. But I was well aware of the fact that history is written by the victor.

Reading this book reminds me once again how little men had learned from history, and how men had always tragically chosen animalistic violence over compromise and mediation in cases of disputes, repeating their ancestors’ mistakes over and over again.

Posted by Alice Poon at 12:25 PM No comments: Links to this post

Available at the Swindon Bookstore in Hong Kong!


The Green Phoenix is available at the Swindon Bookstore in Hong Kong! 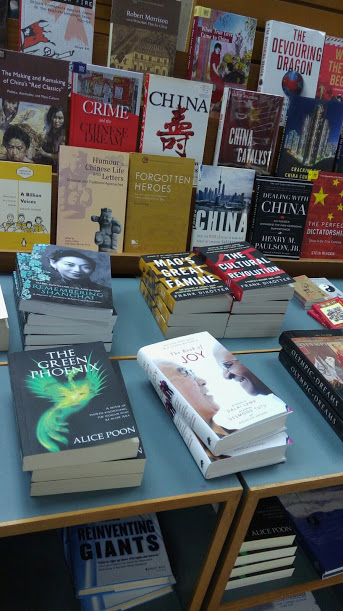 Posted by Alice Poon at 10:16 AM No comments: Links to this post

Email ThisBlogThis!Share to TwitterShare to FacebookShare to Pinterest
Labels: The Green Phoenix


Last Friday, I chatted with the program host of "Focus" on the OMNI TV Cantonese (BC) Channel about The Green Phoenix: A Novel of the Woman Who Re-made Asia: Empress Xiaozhuang.

Posted by Alice Poon at 11:28 AM No comments: Links to this post


I've often been asked this question by interviewers: where did you get the inspiration for writing The Green Phoenix? My answer is: a 2003 historical drama series entitled The Secret History of Xiaozhuang (孝莊秘史). Here is an episode with English subtitles:


Posted by Alice Poon at 3:28 PM No comments: Links to this post

Email ThisBlogThis!Share to TwitterShare to FacebookShare to Pinterest
Labels: Interviews, The Green Phoenix


Twelve years ago (in 2006), Richmond News interviewed me on my self-published Land and the Ruling Class in Hong Kong (2005), which was selected as an Editor's Choice in Canadian Book Review Annual's 2007 issue. The book went on to be traditionally published in Chinese and then in English (2nd Ed.) in 2010 and became a bestseller and won a book prize. It was a long process, to be sure, but it also taught me a good lesson about patience and humility.

Three days ago, I had the pleasure and honor of being interviewed by Richmond News again. This time, it was about my newly published historical novel The Green Phoenix: A Novel of the Woman Who Re-made Asia, Empress Xiaozhuang. With the cornucopia of historical novels on the market, I had been mentally prepared that the marketing process would be an uphill struggle. That said, I am still harboring a humble hope that the compelling story of one brilliant female leader in Qing history, who was no less a devoted mother and grandmother, will attract a wide audience. Perhaps Richmond News will prove to be a trustful ally again!

Link to the interview.

It was a pleasure talking to Daisy Xiong of Richmond News! 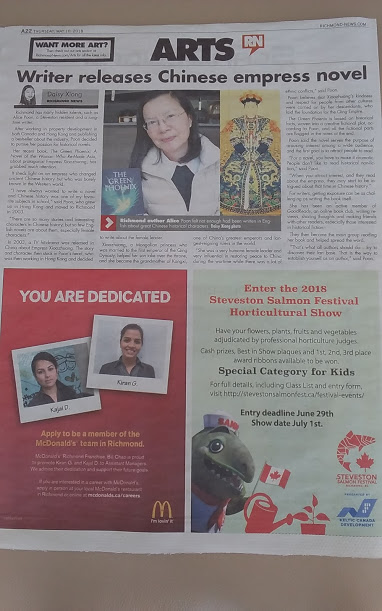 Posted by Alice Poon at 9:59 AM No comments: Links to this post