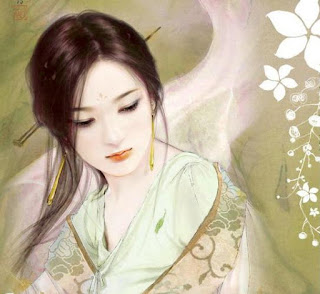 The origin of the Chinese courtesan culture can be traced as far back as the Spring and Autumn period (771 – 476 BC). In those ancient times, it was customary for kings and aristocrats to own slave consorts whose function was to perform music and dance at court functions and to serve their masters in bed. Many of these slave consorts and other street prostitutes were female relatives of defeated war enemies.
Guan Zhong, a chancellor of the State of Qi, saw fit to set up 700 brothels in a designated area so as to apply some administrative control. It was in fact a ploy to extract levies on the prostitution business to finance the army. Also, administrators could summon these prostitutes to entertain visiting state dignitaries. This was the earliest form of official prostitution.

During the Han Dynasty and Three Kingdom period, imperial rulers kept harems of consorts while court officials owned and trained slave courtesans in music and dancing in their homes.
In times of battles, wives and daughters of slain or captured enemies were routinely forced into sex slavery. It was Emperor Wu of Western Han (206 BC – 9 AD) who established a centralized system of “barracks courtesans” to serve soldiers of all ranks in military camps. When battles ended, these barracks courtesans were normally sold to brothels or given to soldiers’ households to serve as maids.

It was not until the Tang Dynasty (618 – 907) that the courtesan culture became institutionalized and more visible in society.
Throughout the Tang and subsequent dynasties, the Ministry of Rites was responsible for running separate music and dance schools to train courtesans. Talented performers were selected to become court entertainers in the inner court of Imperial Palaces. Novices could be bought from slave traffickers.
Social code grouped all courtesans, musicians, actors, actresses and prostitutes in what was called the jianmin caste 賤民 (meaning worthless people), which was hereditary. Marriage to commoners was strictly forbidden.
Emperor Xuanzong (712 – 755), a zealous music lover, personally set up the Pear Garden 梨園 (the imperial music academy) and hand-picked hundreds of top-rated musicians from the music school, training them to be elite court entertainers. The prettiest girls from both the music and dance schools would usually end up being picked out to serve as imperial consorts in the Emperor’s harem.
This kind of music and dance training then became trendy in society. Theatre apprentices, novice music players and dancers as well as prostitutes were all eager to get enrolled and trained at the prestigious court-run music and dance schools, which offered them possible path to a vocation either as court entertainers or high-class courtesans.
As courtesans became more cultivated in the arts, romantic liaison between cultured courtesans and scholars began to flourish and, very often, poetry writing acted as a conduit. Poetry was an important part of Tang culture and officialdom, as it was used as a yardstick in civil service examination to select scholars as state officials. By extension, poetry skills also began to define cultured courtesans.
Two of the most renowned courtesan-poets of the Tang Dynasty were Xue Tao (770 – 832) and Yu Xuanji (840 – 868).

In the Song (960 – 1279) and Yuan (1271 – 1368) Dynasties, the registration and regulation of courtesans and entertainers remained in the hands of the court-run music and dance schools, whose recruits could include girls sold by impoverished families to slave traffickers. Those who were designated as “government courtesans” were mostly enslaved female relatives of criminals and political prisoners, and were on call to entertain ministry officials at public functions or in their homes.
In general, social attitude towards courtesans was negative because of rigid class distinction. With the rise of orthodox Neo-Confucianism in the Northern Song Dynasty, scholar-officials’ association with courtesans was considered immoral and generally frowned upon by society. Granted, it was common for scholar-officials and wealthy merchants to purchase and keep trained courtesans for sex and private entertainment.
The most famous Song courtesan-poet was Li Shishi (1062 – 1127), who had a secret passionate love affair with Song Emperor Huizong (1082 – 1135).

When Zhu Yuanzhang (1328 – 1398) began his reign as the first Ming Emperor, he made Jinling 金陵 (present-day Nanjing) his capital. During his rule, he established an entertainers’ compound along the banks of the Qinhuai River 秦淮河 for the purpose of hosting public functions, to which courtesans were routinely summoned to perform music and dance. This led to brothels congregating in the area throughout the Ming Dynasty, and Qinhuai achieved renown as the Jinling pleasure hub, while nearby Yangzhou became known for its supply of “thin horses” (i.e. girl slaves trained for sale).
However, the Great Ming Code decreed that it was a crime for scholar-officials to sleep with courtesans, and offenders would be slapped with a punishment only one degree below the death penalty. But in real life, it was not uncommon for scholar-officials to flout this law.
Historians have suggested that it was definitely in the late-Ming period that cultivated courtesans came to be highly extolled, as romantic association between the literati and cultivated courtesans normalized. Poetry writing and appreciation often acted as a conduit in these romantic liaisons, and many courtesans were well versed in the craft of poetry writing, calligraphy and painting. In fact, many courtesan-poets/artists married into gentry families, becoming wives and concubines of prominent scholar officials. This phenomenon was considered unique to the late-Ming era.
In Sufeng Xu’s 2007 dissertation entitled Lotus Flowers Rising from the Dark Mud: Late Ming Courtesans and Their Poetry, the McGill University scholar argues that the phenomenon owed much to the rise of literary-political societies throughout the region of Jiangnan (South of the Yangtze) during the troubled times of the Ming-Qing transition.
Elite and non-conformist scholars of these societies would meet regularly and freely discuss poetry and politics. Through promoting and anthologizing poetry writings by cultivated courtesans, and through romantic involvement with them, these scholars were in fact championing a counterculture, which could be seen as open resistance to the austere Neo-Confucianism teachings. It was also a kind of protest against the officialdom examination system that valued solely the art of prose (called “eight-legged essays” 八股文), a relatively insipid form of literature compared to Tang and Song poetry.
Thus, it was this conscious effort on the part of the free-minded, poetry-loving literati that helped to exalt the courtesan culture in the late-Ming period.
The most celebrated late-Ming courtesan-poet was Liu Rushi (1618 - 1664), who was known for her independent spirit and free thinking.

However, ascetic classism again came to the fore during the Qing Manchu rule to denigrate courtesans’ literary writings and suppress the semi-liberated courtesan culture.
It wasn’t until the reign of the Qing Yongzhen Emperor that courtesans, entertainers and prostitutes were finally freed from the jianmin stigma and from then on ranked as commoners.

Thanks Alice for this fascinating account. I had no idea the practice went back two and a half millennia. The connection with poetry is very interesting and gives the practice an added dimension. Some of the dynamics of such relationships was beautifully dealt with in the film Raise the Red Lantern by Zhang Yimou with Gong Li. Although set in the 1920s it gives you some idea of the jealousies and intrigue that must have taken place.


Thank you for leaving a comment, Joel! I'm glad you enjoyed this piece. My upcoming novel "Tales of Ming Courtesans" deals in depth struggles and love relationships of three famous late-Ming courtesans.

Looks like the book will be a must read then. Please let us know when it becomes available.


Thanks! Announcement will be made as soon as practicable! Please watch this space :)

Thanks for sharing. I've recently been watching Chinese fantasy movies and wondered why brothels figured so prominently in them and how the courtesans were cultured in poetry, dancing and music. People just took the brothels for granted. Your post explains the culture though I'm amazed by the way women were and are treated. I'll look out for your novel when it's published. It sounds fascinating.


Hi Boireannach! Thank you for your comment. Yes, gender and class discrimination was the double scourge for low-born Chinese women. Thank you for your interest in my forthcoming novel! Please check my blog for announcement of the release date.