Khansa's Review of "The Heavenly Sword" 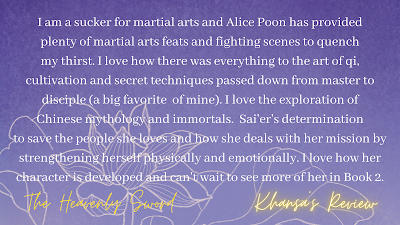 Full Review
Posted by Alice Poon at 1:40 PM No comments:

Mortal Characters in "The Heavenly Sword" 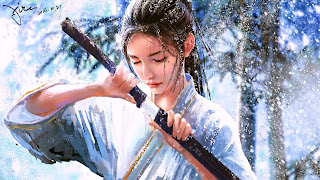 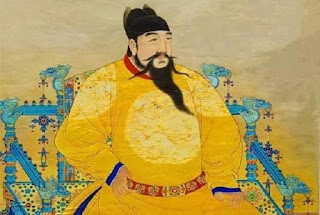 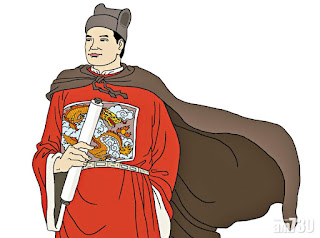 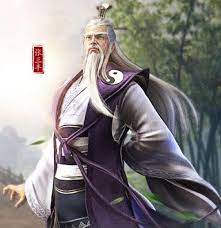 Today I'd like to introduce 4 mortal characters in #TheHeavenlySword who are historical figures (all fictionalized):-
Tang Sai'er - Woman Rebel Leader of the White Lotus Sect;
Zheng He - (aka Ma Sanbao) Palace Eunuch & World Navigator;
Zhu Di - Prince of Yan, 3rd Ming Emperor;
Zhang Sanfeng - Founder of the Wudang School of Martial Arts.
Posted by Alice Poon at 11:39 AM No comments:

Cheri's Review of "The Heavenly Sword" 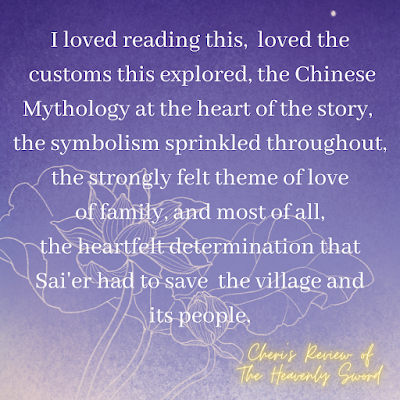 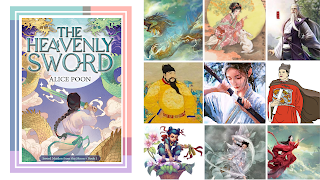 I'm pleased to announce that pre-orders for Kindle and Paperbacks are now available on Amazon. The Hardcover Edition will be offered later. Pre-order prices are good until release date, which is January 10, 2023. Here's the pre-order link.
I've recently posted a Goodreads review (with content warnings) of The Heavenly Sword.
The full text is copied below:
Hello Friends! This review contains content warnings.

The Heavenly Sword is my epic fantasy debut (adult, not YA) and a personal tribute to Jin Yong (1924 – 2018), the iconic grandfather of wuxia (martial heroes) novels. In a lot of ways, this novel and its sequel have been inspired by his works, especially where themes, martial arts feats and history retellings are concerned.

The novel blends deviant wuxia tropes with ancient Chinese myths and alternate history. By “deviant wuxia tropes” I mean wuxia fiction’s traditional hallmark of alpha males playing superheroes has been bent to let genderqueers take leading roles in this novel. Where history is concerned, it retells the bloody civil war between Zhu Yuangzhang's grandson (the designated heir) and his fourth son Prince of Yan, and subsequent Shandong rebellions led by a woman rebel leader.

The narrative is set in an epic imaginary world which transcends the mortal, immortal and demonic realms that in effect mirror Chinese religious and philosophical beliefs. 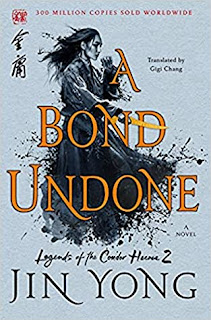 I read this second installment of Legend of the Condor Heroes in Chinese, as I wanted to savor Jin Yong's writing in the original.

Like A Hero Born, this volume is also action-packed with a mind-blowing panoply of martial arts feats, while the story follows Guo Jing's breathless adventures in Southern China in the company of his beloved, Lotus. They stumble across the supreme kung fu grandmaster and Beggar Clan Chief, Count Seven, and in no time they hit it off with each other. He accepts them both as his disciples.

Back stories of the villainous Cyclone Mei as well as of Lotus's father, the vicious lone wolf Apothecary Huang titled as Lord of the Peach Blossom Island, are disclosed. Just as Guo Jing feels secure in Lotus's love for him, he happens upon a formidable contender from the far west, who has the support of Lotus's father. This contender is also the nephew of one of the four supreme kung fu grandmasters - Viper Ouyang, who is a matchless expert in the use of poison.

There was a passage that particularly caught my eye, and it was a description of Apothecary Huang's hallucinating flute melody called "Ode to the Billowing Tide". The writing in Chinese is quite magical. I've checked the English translation in A Bond Undone and found it equally good. Below is the English translation:

The song began as a perfectly calm sea, undisturbed by even the gentlest ripple. Then, the tide crept closer, the water moved faster, churning and frothing. The once gleaming mirror now splintered into white spray and snowy crests. Fish leaped, gulls swooped, the wind howled. Water sprites and sea monsters stole forth as the tide swelled. Icebergs drifted by. The sea boiled, bubbling and steaming. Mermen and mermaids frolicked in the undertow, intermingling, embracing, their lovemaking more arousing and sensual than it could ever be on land. As the tide receded, a dark current prowled unseen beneath the calm surface, tugging, pulling with each ebb and flow, ensnaring its heedless listeners.
Posted by Alice Poon at 3:56 PM No comments:

What Inspired Me to Write "The Heavenly Sword" 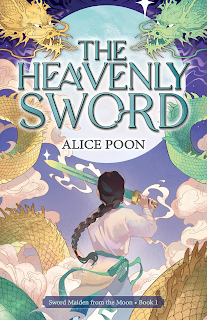 The Chinese wuxia genre of fiction has a long history that dates back to the Tang dynasty. One of the earliest wuxia novels was "Legend of the Dragon-Beard Wanderer" written by a late-Tang writer named Du Guangting (850 - 933). In the modern era, Jin Yong (1924 - 2018) has been hailed as the grandmaster of modern wuxia fiction.

One of the hallmarks of the genre is the blending of historical events with tales of chivalrous adventures of righteous martial artists with superhuman skills, embedding themes of brotherhood loyalty and gallant altruism.
Jin Yong is a celebrated name for my generation and several subsequent generations of Chinese people. He has been compared to J. R. R. Tolkien of Lord of the Rings fame and I do think the comparison is apt in that both authors were endowed with prodigious power of imagination.

As one of Jin Yong’s more well-known wuxia series—the Condor Heroes trilogy—goes through the process of being translated into English and published, his novels have at last begun to gain wider recognition in the English language book world.

My own writing career began with historical Chinese fiction as I have always been a devoted dabbler in Chinese History. As Jin Yong’s’ readers would know, all his wuxia novels have the marks of well-researched historical settings and casts that include historical characters. The enduring popularity of his novels as well as wuxia C-dramas seems to speak to the proven viability of mixing history with wuxia fantasy.

One day I went down memory lane to revisit my childhood days when my cousins and I, goaded by Jin Yong’s novels, used to amuse ourselves by playacting martial arts heroes and heroines. We would spar with wooden ruler swords, don capes of torn towels and hop from chair to chair in imitation of qinggong stunts. Beset with nostalgia, I started toying with the idea of writing wuxia fantasy novels.

That was how the notion of writing the Sword Maiden from the Moon duology was first spawned. Later, as more creative ideas developed, the realist in me pleaded for the story to be grounded in a civil war and rebellion that happened in the early Ming Dynasty, while the dreamer in me nudged me to create a female knight-errant as the lead and a magical world where mortals, immortals and demons are staged, with retelling of popular Chinese myths.

As much as the heroine of my story is imaginary, she is nonetheless inspired by a real but little known woman rebel leader who escaped capture under the Yongle Emperor’s reign. I have retained her real name “Tang Sai’er” (唐賽兒) in the novel and she was also truly a leader of the White Lotus Sect (白蓮教). I thought her story of chutzpah was worth telling. But information about her life is so lacking though that it afforded me much creative liberty to paint her character. Her “Chang’e” (嫦娥) side was prompted by a Chinese novel titled The Unofficial History of the Female Immortal (女仙外史) written by a Qing novelist named Lu Xiong 呂熊 (1642-1723). 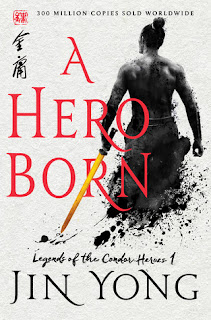 It was a lifetime ago that I had read Legend of the Condor Heroes in Chinese. I've long forgotten the plot and the myriad of characters. The only names that I still remember are perhaps Guo Jing and Huang Rong (renamed Lotus in this English version). As a primary school student reader, I certainly hadn't been able to grasp the significance of the historical background the story was set in. But what have really stuck in my mind all through the years are probably the themes of brotherhood loyalty and knight-errant righteousness.

I found that this first volume of the 4-book series was still very gripping as a wuxia story with its huge cast and complex plot twists. I was particularly impressed with the Temujin story, which closely adheres to The Secret History of the Mongols. The historical character Qiu Chuji (an irascible Taoist martial arts expert in the novel) was given a colorful treatment. The story was set against a tumultuous background of incessant conflicts/wars between the Song (Han Chinese), Jin (Jurchen) and Mongolian regimes and expounded on how the chaos impacted on individuals and society.

It appeared to me that Jin Yong's story structure with intertwining plot lines was more evocative of Dumas (Count of Monte Cristo) than Tolkien (Lord of the Rings).

The fight scenes, which make up half of the book's contents, were vivid and cinematic and never boring. On the other hand, the narrative did not lack poignant episodes. The only thing lacking was perhaps romance, at least in this volume. However, the final episodes seemed to have set the stage for the relationship between Guo Jing and Lotus to bloom into something more than friendship.

Some reviewers have complained about the literal translation of the character names. Perhaps the decision to do literal translations of names was out of concern that non-Chinese-speaking readers might find pinyin romanization a bit hard to follow.
Posted by Alice Poon at 10:41 AM No comments:

Alice Poon
Canada
Alice Poon is a dreamer and a realist, and it shows in her storytelling. After a childhood spent devouring Jin Yong’s wuxia (or martial arts heroes) novels, she has, over the years, fed herself a steady diet of modern wuxia/xianxia and historical C-dramas, Chinese history and mythology masterpieces. Since the release of her two historical Chinese novels: The Green Phoenix and Tales of Ming Courtesans, nostalgia for the magical world of wuxia has spurred her desire to write in the Chinese fantasy genre. Her writing has been inspired by the wuxia/xianxia media, Chinese mythology classics and period history. She lives in Vancouver, Canada and wishes to indulge herself in putting her imagination on the page.