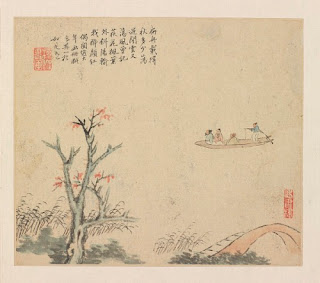 [Caption: This is one of several of Liu Rushi's paintings that are held at the Freer Gallery of Art in Washington DC. Last year I wrote a blog post citing the relation between those paintings and a 20th century French Diplomat Jean-Pierre Dubosc, and explaining why I featured this poet-courtesan as a protagonist in my new novel Tales of Ming Courtesans. https://bit.ly/3hA9HRE ]

The story of Liu Rushi may have ended in tragedy, but her spirit lives on!
In a patriarchal society where poetry writing had traditionally belonged in the male sphere, and where female writing had always been slighted, Liu was known to have purposely compiled an anthology of poems entitled 閏集, collecting poetry written by women and focusing on works by courtesans, whom society ostracized collectively as a lowly class of jianmin, i.e. worthless people. This collection was incorporated into her husband Qian Qianyi’s comprehensive collection of Ming poems entitled 列朝詩集. She could well be considered as a pioneering champion of women’s literature. Sadly a lot of Liu Rushi's calligraphy, poetry collections and paintings (along with most works by Qian Qianyi, Chen Zilong and other Ming loyalist poets/artists) had been lost during Qianlong Emperor's literary inquisition.

On a personal level, Liu was determined to seek proper marriage against all odds, as she knew this was the only way to defend herself against class discrimination. She succeeded in gaining “wife status” in literary dignitary Qian Qianyi’s household.

The multi-talented Liu Rushi was also known for her habit of cross-dressing and mingling with elitist literati in poetry societies in defiance of gender barriers and with an aim to improving her craft of writing and painting. It reminds me of the renowned 19th century French novelist George Sand, also notable for her cross-dressing in rebellion against social conventions. But Liu lived two centuries earlier, and in patriarchal China!

This all goes to show how Liu used her “spirit of independence and liberal thinking” to wage war on classism and sexism and to achieve greatness in the arts. It earned her the iconic historian Chen Yinke’s adoration and respect.  http://chinese.thu.edu.tw/upload/newspaper_upload/28/05-%E5%BB%96%E7%BE%8E%E7%8E%89.pdf