Backdrop to the Late-Ming Courtesan Culture 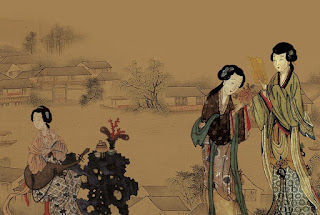 During my research for the novel Tales of Ming Courtesans, I discovered that a unique courtesan culture was evident in the late-Ming era, one where an unprecedented number of cultured courtesans engaged in the high art of poetry writing. It could be said that courtesans from this era enjoyed much more respect than their counterparts who lived in earlier times or after. This phenomenon had in fact been rooted in the nonconformist literati’s threefold discontent in those unsettling times.

Politically the liberal-minded scholars were dismayed with incompetent rulers and a corrupt court dominated by self-serving eunuchs. On a personal level, they felt stifled by the orthodox Neo-Confucianism teachings that advocated suppression of personal desires as well as adherence to rigid moral codes. In regards to officialdom pursuits, they were fed up with civil exams that prohibited any form of creative writing, forcing candidates to write only prosaic eight-legged essays that focused on the Four Books and Five Classics.

As a form of protest and outlet for pent-up emotions, they set up private poetry societies, where they could engage freely in political discourse, poetry writing and appreciation, and overt promotion of poetry written by cultured courtesans. It was against this backdrop that high-minded courtesans’ literary talents found a nurturing harbor.

Because of the appearance of these quasi-political poetry societies, there was an explosion of poetry anthologies that included works by both the literati and the famous courtesans. In fact, anthologizing courtesans' poetry became a popular activity at the poetry societies.

Unfortunately, this unique phenomenon only lasted until early Qing. During the High Qing reign of Qianlong, while ordering the compilation of the Library of Four Treasures 四庫全書, the Emperor used the opportunity to deliberately cull all literary works by Ming poets/scholars whom he deemed as anti-Qing.

Caught in the literary inquisition were the works by the talented poetry prodigy Liu Rushi 柳如是 and works by her husband Qian Qianyi 錢謙益 and her lover Chen Zilong 陳子龍, both of whom were famous Ming poets. Obviously, works by other Ming loyalist poets met the same fate. It’s only in recent times that such once-lost literary works began drawing a little more attention from Chinese literature academicians.

This could also explain why Ming poetry has been so underrated relative to Tang and Song poetry.

For reference, please go to this link:-

The following is a quatrain written by Liu Rushi (one of her famous "Eight Quatrains on the West Lake" 西湖八絕句之一):-

East of the curtained window,

Butterflies in the breeze cavort.

On the spring-scented path by West Lake,

This poem attracted the attention of her future husband Qian Qianyi, who responded with another quatrain:-

A good verse refreshes like a breeze from the pond.

Both the above poems, plus others, can be found in the novel.