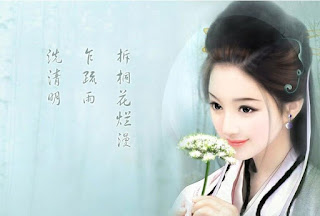 I was quite excited when I found last week on the internet a collection of Liu Rushi’s paintings. Before this discovery, I was aware that one painting by her, titled Misty Willows by the Moonlit Dike, is held at the Palace Museum of Beijing.

Liu Rushi 柳如是 (1618 – 1664), Chen Yuanyuan 陳圓圓 (1625 – 1681) and Li Xiangjun 李香君 (1624 – 1653) were courtesans with exceptional talents and stunning beauty from the late Ming dynasty. They were the most celebrated among the famous Eight Great Beauties of Qinhuai in Nanjing 秦淮八艷, by virtue of their high-profile romance with prominent literati and their drama-filled lives.

Liu Rushi was a poetry prodigy with artistic flair in calligraphy, painting and embroidery, while Chen Yuanyuan and Li Xiangjun were renowned kunqu opera singers and pipa (4-stringed lute) players. They are the three protagonists of my upcoming novel.

I’ve recently come to know that some of Liu's paintings are now in the possession of the Freer Gallery of Art (Smithsonian Institution) in Washington DC. Information on the museum’s website shows that the collection was purchased at a 1992 Sotheby New York auction from (presumably the estate of) a Frenchman named Jean-Pierre Dubosc (1904 – 1988).

Curiosity drove me to do a little research on Dubosc, and I’ve discovered another interesting story.

Jean-Pierre Dubosc was a French diplomat attached to the French Legation in Beijing and an avid collector of Chinese artefacts. He happened to be married, at one time, to Janine Loo, the youngest daughter of C. T. Loo (1880 – 1957), who had, since 1908, established himself in Paris as a dealer in Chinese antiques. According to China Rhyming’s blog post, while living in Beijing, Dubosc occupied himself with sourcing Chinese treasures from antique and curio shops for various European and American museums, as well as for C. T. Loo’s Paris dealership business.

C. T. Loo, a mysterious man of humble birth, revered in the West but scorned in his homeland for stealing its patrimony, was the subject of a 2013 biography by Geraldine Lenain, an Asian art expert now living in Shanghai, titled Monsieur Loo: Le Roman d’un Marchand d’Art Asiatique (Mr. Loo: The Novel of an Asian Art Dealer). She had obtained Loo’s precious personal archives from his grandson, and permission to write the biography from Janine Loo. The publication is in French and in Chinese. I’m not sure if there is an English translation. I digress.

Back to Liu Rushi’s paintings. It is not known when or how or from whom Dubosc got those paintings. Nor is it clear why he had not sold the paintings while he was still alive. Was it because nobody in the West knew who Liu Rushi was, and so there was no demand for her work? Or was it for some other reason? It is a known fact that many of the poem and calligraphy collections and paintings by Liu Rushi and her husband Qian Qianyi were destroyed in the Qianlong Emperor’s cull of anti-Qing literary work when he championed the creation of the Siku Quanshu (Complete Library of the Four Treasuries). Dubosc could well be aware that Liu’s paintings were a rare find.

For many people, especially non-Chinese, the name Liu Rushi is probably not a familiar one. Yet, despite her low status as a courtesan, she was the subject of an 800,000-word biography written by the eminent historian and intellectual luminary Chen Yinke 陳寅恪 (1890 – 1969), who spent the last ten years of his life researching and writing it. The title of the work is: An Ulterior Biography of Liu Rushi. More importantly, he famously named her as the embodiment of the Chinese nation’s spirit of independence and liberal thinking. That comment was what had goaded me to read, research and write about this multi-talented poet-courtesan.


A note of interest is that Chen Yinke had been condemned as anti-revolutionary in his fading years, and it was not until 1988 that his former students and friends could openly commemorate him. His seminal biography of Liu Rushi and other works only emerged from oblivion in the 1990s. Hence the auction of Liu’s paintings in 1992 would appear to be a natural timing.

Here are some of Liu’s paintings found on the website of the Freer Gallery of Art: 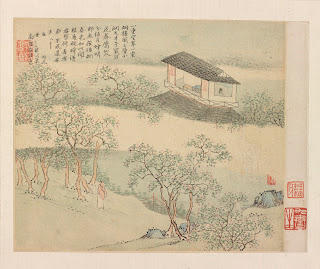 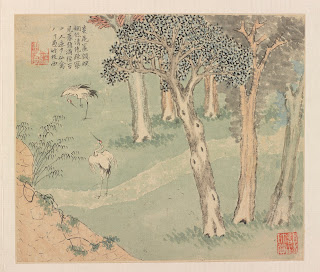 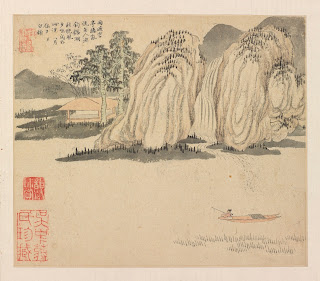