Book Cover of My New Historical Epic "The Green Phoenix"


Earnshaw Books will be releasing my new historical epic titled "The Green Phoenix" on September 1, 2017. It is a novelized account of the life of Empress Dowager Xiaozhuang, born a Mongolian princess who became a consort of the Manchu court, and then the Qing Dynasty's first matriarch. She lived through harrowing threats, endless political crises, personal heartaches and painful losses to lead a shaky Empire out of a dead end to peace and stability. The story is set against a turbulent canvas as the Chinese Ming Dynasty is replaced by the Qing. Xiaozhuang guides her husband, her lover, her son and her grandson - all emperors and supreme leaders of the Qing Empire - to success against the odds. 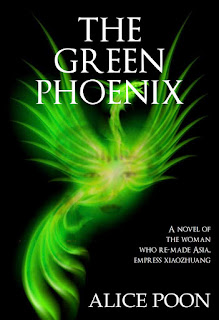 So much of imperial Chinese history is an enigma; a world we, as outsiders, are shut out off. Alice Poon’s novelised life of the Empress Dowager Xiaozhuang fictionally pulls back the curtain on Manchu court life and lets us step into a forbidden world.

Alice Poon has written a masterpiece of Chinese history little known in the West. It's a story of love, betrayal and loyalty, and shows how one woman inspired the reunification of China. For so long the West has fixated on the end of the Qing dynasty, but as Poon beautifully recreates in her book, the real heroine of the Qing is the Empress Dowager Xiaozhuang. Never before has this story been told in English, and it's arguably the most important historical novel of early Qing Dynasty China.