In 2013 I saw the film adaptation Michael Kohlhaas at the French Film Festival in Hong Kong and was very impressed with the powerful theme of one man’s obsessive quest for justice and the intensely haunting cinematography and acoustics.

Recently I saw a GR friend’s review of the novella and was lured to read it. Styled in a chronicle format, the novella is written with impassive detachment, which actually adds to the poignancy of the story that is based on a true event in 16th century Germany (the real person was named Hans Kohlhaas).

Michael Kohlhaas is a horse dealer leading a peaceful life on the border between Saxony and Brandenburg. One day when he takes his horses to a fair as usual, passing through territories that belong to a nobleman von Tronka, he is demanded for the first time to pay tolls and to show his pass. When he fails to produce a pass, his two black horses are forcibly detained as collateral. He leaves his servant behind to tend to the horses while he returns home to see about the issuance of a pass. In his absence, the two horses are made to work the fields and reduced to pitiable state, and his servant savagely beaten up. He tries to seek redress in a Saxony court but his charge is dismissed. His wife decides to help him take the petition to the ruler of Saxony, but is brutally wounded by the ruler’s guards and dies a little later.

Blinding rage spurs Kohlhaas to take revenge against von Tronka, which act balloons into insurgence against the state. The aristocrats decide that Kohlhaas must be punished for his outrageous actions, despite the attempt by Martin Luther and the ruler of Brandenburg to save him.

The climax comes at the very end, which involves a piece of secret paper that Kohlhaas holds, that concerns the fate of the ruler of Saxony.

The novella begs the question: what do you do when you find that the written law doesn’t protect your rights and interests?

I found this novella to be a compelling read and am giving it 4 stars, although I would say that the 2013 movie starring Mads Mikkelsen is even better.

Posted by Alice Poon at 6:21 PM No comments: Links to this post


In Chapter One of The Green Phoenix, there is mention of Bumbutai's wedding coronet, which is made of blue kingfisher feather inlays. Here are images of two such headdresses:- 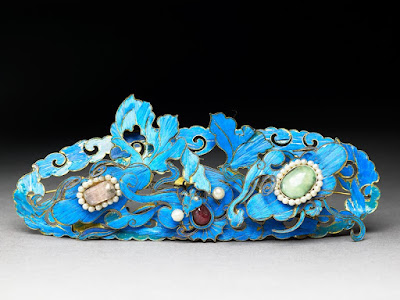 The use of kingfisher feather in hair ornaments has a long history in China. Here's an article that gives a little historical information and describes the process of the craft of "tian tsui" (點翠) :-


Posted by Alice Poon at 1:30 PM No comments: Links to this post


I had never read anything about the history of Italy’s unification (called the “Risorgimento”), and was glad to read this charming novel. The story is set in 1860s Sicily and accounts for the personal trajectory of a Sicilian aristocrat Fabrizio Salina as he gets caught up in the social and political storm that would bring democracy and irrevocable changes to the various disparate Italian states.

Written in a lush style embellished by similes and metaphors, the story is told through a narrator whose voice is tinged at once with nostalgic melancholy and dry humor, chiefly from Fabrizio Salina’s viewpoint. In face of imminent upheavals instigated by revolutionaries led by Giuseppe Garibaldi who aims at uniting the Kingdoms of Sicily and Naples (ruled by the French Bourbons) with the Kingdom of Sardinia (ruled by the State of Savoy), the protagonist, who belongs to the old ruling class, adopts a pragmatic attitude by persuading his Sicilian people to lend support to the new democratic regime. He also encourages his ambitious nephew Tancredi in his scheme to marry Angelica, the dazzling daughter of a nouveau riche from the peasant class, even though he is aware that his youngest daughter is madly in love with Tancredi.

Much of the novel is devoted to exhibiting Fabrizio’s emotional torment, moral struggles and psychological turmoil that arise from the unsettling external paradigm shift, signifying the inexorable demise of an era, to which he is irredeemably attached.

Perhaps this passage reveals the essence of Fabrizio’s pride and agony:

It was useless to try to avoid the thought, but the last of the Salinas was really he himself, this gaunt giant now dying on a hotel balcony. For the significance of a noble family lies entirely in its traditions, that is in its vital memories; and he was the last to have any unusual memories, anything different from those of other families.

Posted by Alice Poon at 9:56 AM No comments: Links to this post


I am honored to be among the 20 Richmondites (and the only writer) profiled in Richmond News' special feature "Best of Richmond" dated May 31, 2018. One question I was asked was which city I would compare Richmond to, and my answer was, your guessed it, Hong Kong. To me, both cities seem to share positive and negative traits. The positives would include a vibrant cosmopolitan culture, commercial success and cultural diversity; the glaring negatives would comprise affordable housing problem, acute materialism and lukewarm interest in literary reading. 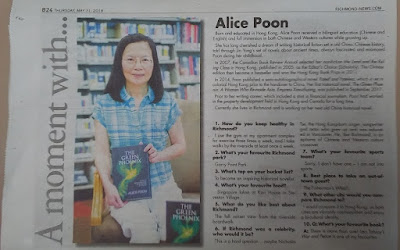 I've dug out from my files the 2006 Richmond News interview about my non-fiction book Land and the Ruling Class in Hong Kong. 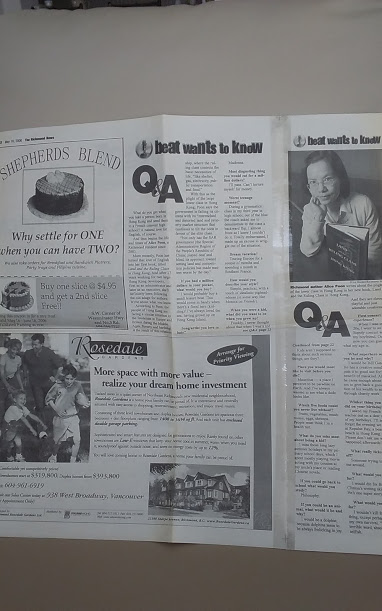 Posted by Alice Poon at 12:40 PM No comments: Links to this post