This latest five star Review of The Green Phoenix by Jason Pym, a British artist resident in Dali, Yunnan, who is well versed in Chinese culture and history, just blew me away!

"For me this was not only a gripping read, but expanded my knowledge of an important part of Chinese history that I was not familiar with."

"All in all, Green Phoenix is a stunning, epic tale, yet showing how individual personalities and relationships of just a handful of people can shape nations and the destinies of millions. A thoroughly enjoyable read."

Posted by Alice Poon at 12:48 AM No comments: Links to this post


I went to Swindon Books yesterday and saw The Green Phoenix on the Bestsellers~New Arrivals Shelf. Honored to be in esteemed company! 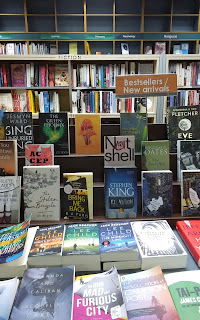 Posted by Alice Poon at 6:19 PM No comments: Links to this post

Empress Wu Zetian - A Film in the Making!

Chinese Empresses are getting hot! First the exhibits of Qing Empresses at American museums, and now an English-language film in the making! https://t.co/wihXHZi2DD
— Alice Poon (@alicepoon1) November 6, 2018


Posted by Alice Poon at 12:58 PM No comments: Links to this post

In Commemoration of Jin Yong


Jin Yong (aka Louis Cha), the larger-than-life literary inventor of the “rivers and lakes” universe (江湖), my all-time favorite author and idol, and beloved novelist of the Chinese cultural world, passed away two days ago at the age of 94. His mesmerizing martial arts and chivalry novels were an integral part of my growing up. My summer holidays in the primary school years were spent either burying my head in rented paper editions of his novels, or dueling with my cousins with makeshift swords in games of acting out those stories. He has been and will always be my hero.

Perhaps one person is better placed than I to pay proper tribute to my hero. He is the one who translated the late Mr. Cha’s first novel The Book and the Sword (the translated version was published in 2004 by Oxford University Press) and he is Graham Earnshaw. He has just written an article in the SCMP explaining his approach to the translation and reminiscing his exchanges with the iconic novelist. He made this trenchant remark: “The integration of Chinese culture into world culture is very important, and it will eventually happen. When it does, Mr. Cha’s stories and characters will be an important part of it.” I cannot but agree with him.

Graham Earnshaw explains his approach to translating Jin Yong's first novel "The Book and the Sword". He added: "The integration of Chinese culture into world culture is very important, and it will happen eventually. When it does, Cha's stories and... https://t.co/sFjNj4mrwB
— Alice Poon (@alicepoon1) November 2, 2018

Posted by Alice Poon at 7:13 PM No comments: Links to this post