Had a Fun Day!


It's not everyday that you get to meet celebrated authors who live in the same city. I was so delighted to have the chance to chat with Janie Chang, Alfred dePew, Eve Lazarus and Lianne Oelke yesterday at Book Warehouse Broadway, thanks to the bookstore's dedicated staff and organizers of Canadian Independent Bookstore Day! 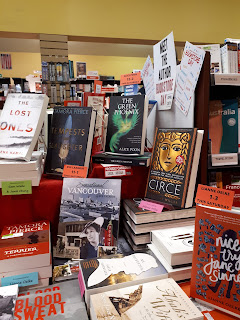 Books that I recommended: The Garden of Evening Mists, Do Not Say We Have Nothing, An Officer and a Spy. 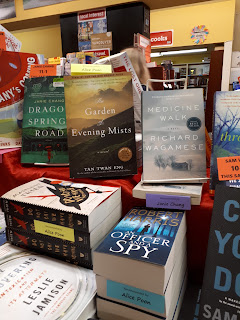 Posted by Alice Poon at 5:10 PM No comments: Links to this post

"A national day to celebrate the awesomeness of indie bookstores! Come out to the Book Warehouse on Broadway for a day full of excitement, books, guest authors, books, prizes, discount coupons, books, a prize wheel, a scavenger hunt, a draw for an astrology reading, books, and more!

Our authors this year are:

For more info on Bookstore Day itself: http://www.canadianindependentbookstoreday.ca/

This promises to be our funnest year yet! See you all there!"

I will be at Book Warehouse, 632 Broadway West, Vancouver, from 12 noon to 2 pm on that day. Other authors and I will be recommending our favorite books (my favorite genre is historical fiction) to customers.

Come join us for a fun day!

Posted by Alice Poon at 10:22 AM No comments: Links to this post


I'm glad that my favorite author of all times - Jin Yong - is finally getting the attention of American readers with the launch of A Hero Born. This is the first of a 12-volume translation of his popular "Legends of the Condor Heroes Trilogy" ("射鵰英雄傳", "神鵰俠侶", "倚天屠龍記").

I read most of Jin Yong's wuxia novels in my childhood and based on my memory, the ones I liked best were "書劍恩仇錄" (The Book and the Sword) set in Qianlong Emperor's reign, and "天龍八部" (there is no English translation yet, and the tentative English title is "Demi-Gods and Semi-Devils") set in Southern Song dynasty. In the latter novel, the character that I remember most vividly is a prince named 段譽 from the Kingdom of Dali (大理國, in present-day Dali, Yunnan), whose special martial arts skill is termed "凌波微步" ("mini-steps on waves").

The novels by this literary icon from Hong Kong have long since ignited my interest in Chinese history and inspired me to write historical fiction set in ancient China.
Posted by Alice Poon at 1:22 PM No comments: Links to this post

Did You Know Johann Adam Schall von Bell was a Key Adviser to Empress Dowager Xiaozhuang?


It may be common knowledge for current and former students of The Chinese University of Hong Kong that the earliest student hostel ever built on campus is called the Adam Schall Residence. But perhaps the person Johann Adam Schall von Bell, in honor of whom the hostel was named, is not too familiar a figure for many, students or otherwise, in Hong Kong or elsewhere.

Johann Adam Schall von Bell was a German Jesuit missionary born in Cologne. In 1619, at the age of 28, he arrived Macau with a few other Jesuit missionaries, planning to enter China to spread Christianity, only to find themselves stranded in the Portuguese Settlement, as it was the Chinese policy then to curb foreigners’ entry. So Schall von Bell decided to settle down in Macau and learn Chinese and continue with his mathematics studies.

A few years later, in 1622, he unexpectedly got embroiled in Portuguese Macau’s military defense against an attack by the Dutch Calvinists, which attack was instigated by trade disputes. The Dutch (i.e. the Dutch East India Company) had for a long time been jealous of Macau’s lucrative intermediary position on the China-Japan trade route (silk in exchange for silver) and wanted to capture the Settlement. Schall von Bell and his fellow Jesuits went up to the citadel to man cannons that fired on the invading Dutch soldiers, and a shot accidentally hit an explosive dump near their camp. The defense was victorious and the Dutch were chased out.

When news of this reached the Ming Emperor’s ears, he invited Schall von Bell to Court and asked him to produce cannons for use against the invading Manchus. But the Jesuit’s skill at weaponry was clearly eclipsed by his knowledge in astronomy and his work in the calendar reform.

After the Ming Empire transitioned to the Qing Dynasty, Schall von Bell rose to prominence as a key adviser in Shunzhi Emperor’s reign. His influence on Shunzhi and his mother the de facto regent, the Empress Dowager Xiaozhuang, was nothing less than profound. Out of veneration for him, Shunzhi addressed him as “Mafa” in private, meaning “Grandfather” in Manchu. The Jesuit priest had first gained the Empress Dowager’s trust by healing a sickness that her niece had contracted, just prior to her becoming Empress to Shunzhi Emperor. It is said that Schall von Bell was overtly supportive of the Empress Dowager in her selection of Kangxi as the successor to Shunzhi. After Shunzhi died, Schall von Bell’s envious Chinese colleagues initiated a depraved false accusation against him, which led to a death sentence by slicing. He would have perished if not for an earthquake that shook the grounds of the execution square, which alerted the Empress Dowager to immediate intervention in the case. Although ultimately exonerated, his prison ordeal took a toll on his already frail health and he died shortly after regaining freedom.

Posted by Alice Poon at 2:38 PM No comments: Links to this post


Having previously read Emile Zola’s The Masterpiece (L’Oeuvre), which gave me some idea of the Parisian art scene and the lives of aspiring impressionist painters of mid 19th century France, I found this dramatized life story of Claude Monet familiar and believable. I don’t know much about the art of painting, but Monet’s eight water lilies murals exhibited at the Musee de L’Orangerie had strummed a heartstring in me, as in many others. Cowell saw an interesting link between Monet’s love for Camille Doncieux and his obsession with the painting of water lilies in his late life, and spun an evocative yarn out of it.

In general it is a story of romantic love between a struggling artist (Claude Monet) and a beautiful girl from a well-heeled background (Camille Doncieux), with all the twists and turns related to the depressing fight against poverty and social prejudice, and to breach of loyalty between lovers and friends. Sprinkled throughout the novel are elegant descriptions of countryside landscapes and seascapes in various parts of France, which become Monet’s and his painter friends’ painting targets. Towards the last fifth of the novel, the drama heightens as tension builds up in the love triangle between Monet, his wife Camille and his lover Alice (wife of his patron).

Overall, it is a well-constructed romance with trimmings of the art scene in the background, if some elements of the story lean on the make-believe side. Personally I feel that the deliberate and frequent insertion of short French phrases in the dialogues doesn’t add any more French flavor to them – it is a touch unnatural and awkward.

Posted by Alice Poon at 2:20 PM No comments: Links to this post