Five stars from me. I would use three words to describe this book: “somber, side-splitting, shrewd”. “Somber” refers to the subject matter, which is about abject poverty and hunger in urban cities, as seen through Orwell’s eyes in Paris and London on his experimental tour. “Side-splitting” is my reaction to the ironic and dry humor that he effortlessly displays in describing some episodes. “Shrewd” refers to his observation of the lives of those barely surviving in society’s lowest echelons, often down to the most trivial minutiae and with keen insight.

The book is a unique kind of partly fictional, semi-autobiographical, travel diary in which Orwell tells the experiences of a British writer working alongside plongeurs (dishwashers or scullions) in a Paris hotel kitchen, and then living with tramps (homeless people) upon his return to England. His description of the Paris hotel kitchen will make you think twice before stepping into a high-class hotel restaurant ever again!

These are some trenchant passages from the book:-

When one is overworked, it is a good cure for self-pity to think of the thousands of people in Paris restaurants who work such hours (seventeen-hour day, seven days a week), and will go on doing it, not for a few weeks, but for years.

I believe that this instinct to perpetuate useless work is, at bottom, simply fear of the mob. The mob (the thought runs) are such low animals that they would be dangerous if they had leisure; it is safer to keep them too busy to think……But the trouble is that intelligent, cultivated people, the very people who might be expected to have liberal opinions, never do mix with the poor. For what do the majority of educated people know about poverty?

Why are beggars despised? I believe it is for the simple reason that they fail to earn a decent living…. Money has become the grand test of virtue. By this test beggars fail, and for this they are despised.

Posted by Alice Poon at 2:01 PM No comments: Links to this post

This was one of those reads that don’t strike a chord in me. I’m giving the novel 3.5 stars. There’s nothing wrong with the writing. On the whole, the storytelling is skillfully executed, with sympathetic characters and descriptive setting, evoking sense of place and time. The description of the war scenes and aftermath in the last third of the book is particularly piquant.

It is a historical novel set in Guernica in the days leading up to the Second World War. The story is mainly about the experiences of three Basque peasant brothers and their loved ones as they live through the dark days of the Spanish Civil War. Loosely interlaced with the main story is the snippet that tells how Pablo Picasso gets inspiration for his famous mural titled “Guernica”.

My feeling is that the novel reads like a collation of short stories. Well told as the separate stories are, there is a lack of overall cohesiveness. I can’t relate to any of the characters on an emotional level. Also, I find the background of the Spanish Civil War a bit sketchy – I was expecting more historical details from the novel.

Posted by Alice Poon at 4:54 PM No comments: Links to this post

Book Trailer for "The Green Phoenix" by Alice Poon

Empress Dowager Xiaozhuang was a leader who did not crave power,
but who used power in a humane way and for the greater good.

Posted by Alice Poon at 10:58 AM No comments: Links to this post

Paper Version of "The Green Phoenix"


Now looking back, it's hard to imagine that it has taken three whole years of labor to have this product finally birthed. 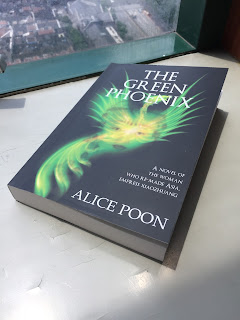