Forced Into a Corner


Ever since I learned about the heinous cleaver attack on Ming Pao ex-Editor Kevin Lau, there’s been this tight knot weighing down on my heart. Prior to this incident, I had been trying to detach myself little by little from engaging in writing or speaking about current affairs in Hong Kong due to a daily-deepening feeling of powerlessness about my hometown’s fast deterioration from a sophisticated international metropolis into a crass, soulless, xenophobic and parochial Chinese city. What’s more troubling is the fact that the sea change has come by involuntarily from Hong Kongers’ standpoint. It has come in the form of more and more oppressive tactics, either overtly or deviously, being thrust down Hong Kong’s throat by the Central Government and the submissive puppet-like Leung Chun Ying administration.

In recent days, the noose-tightening seems to be reaching an apex.

First there was the HKTV licensing controversy. Up to now, the Leung government still hasn’t come up with a shred of logical reason behind its decision not to grant HKTV, whose boss Ricky Wong is known for his liberal views, the free-to-air TV license. Meanwhile, the managing director of government’s consultant firm lost her job for shining a not-so-friendly light on Leung Chun Ying’s public statement. Was it a coincidence or was it a high-handed maneuver behind the scene? It’s anyone’s guess.

Then there came news of Ming Pao replacing its Chief Editor Kevin Lau with a more docile counterpart from Malaysia, apparently under some kind of political pressure. [This seems to foreshadow Lau’s unfortunate tragedy and the two incidents might be linked by a common motive. As for speculation on the motive behind the vicious attack, please refer to Asia Sentinel’s story on the front page.]

Then we heard that a popular, sharp and inquisitive radio talk show host Lee Wai Ling got abruptly fired from Commercial Radio at a time when the station’s license is up for renewal.

These three events were enough to create a sensitive perception within the Hong Kong media that freedom of the press, as professional journalists understand it, is teetering on the brink of collapse.

Some time in between the above incidents, the Leung government, with either support or order from the Central Government, chose obtusely to pander to the tourism industry with promises to do anything that would please Mainland tourists and/or shoppers and to obstinately refuse to control the number of individual-scheme incoming tourists, despite thundering protests by the Hong Kong public. The Mainland assumes the stance that it is doing Hong Kong’s economy a big favor and thus Hong Kongers, instead of whining about congestion, should really be thankful for such a benevolent act. In other words, Hong Kongers should bend over backwards to welcome bigger and bigger hordes of Mainland tourists even if the city is already bursting at the seams in terms of capacity and their normal lives have been callously disrupted.

When a spirited few tried to vent their anger over government’s dismissive attitude by calling Mainlanders names (like “locusts”), it was considered a sacrilegious sin and even troubled Mr. Chow from EOC to investigate whether racism is involved (LOL!). Some people have obviously forgotten that Mainlanders were equally capable of name-calling (like who called whom “dogs”?). So, what’s the big deal? Why has this innocuous little incident incensed the Central Government so much that its mouthpiece had to carry on with its tongue-lashing for several days in a row? The key problem here seems to be that the Mainland is getting more and more arrogant and condescending towards Hong Kong (because China is now an economic superpower?), exhibiting a total lack of regard or respect, and a deliberate misunderstanding, towards Hong Kongers’ feelings, opinions and views.

Against such a backdrop, news broke that the mild-mannered and respected media professional Kevin Lau was viciously attacked in broad daylight with life-threatening wounds. Any fair-minded person would be disgusted with such pre-meditated atrocious crime. I, who have kept silent for a while, was enraged to the point that I had to thrash out my anger on (I was going to say paper, but then realized I would be posting the text in cyberspace) my blog. There is no doubt in my mind that there is a “master” behind the perpetrators, whose motive I would speculate is to gag Lau or to punish him or both. Even putting aside the issue of press freedom and freedom of expression, this is a blatantly barbaric act that can’t be tolerated in a civilized and law-abiding society like Hong Kong (although it is inclining towards its northern neighbor). All Hong Kongers should unite in sending this message across and in pressing the Hong Kong Police to find and bring the real culprits to justice.

If evidence does point to our freedom of expression and of the press being the epicenter of the wicked crime, I would say to Hong Kongers: “Please don’t pretend to be asleep any longer. It’s time to wake up voluntarily and defend your own rights. No one else can do it for you.”

My thoughts go out to Mr. Lau and his family members and I wish Mr. Lau a full and speedy recovery.

Book Review: Not the Slightest Chance: The Defence of Hong Kong 1941 (By Tony Banham)


This is a factual and blood-curdling slideshow of the eighteen days of horrifying fighting against the Japanese in Hong Kong in the not-too-distant past.

I belong to the post-50s group who were lucky enough to be born just after the war. While I was growing up, my mother and relatives belonging to her generation seldom talked about their war-time experiences. It was only recently that I heard about some traumatic personal stories told by a primary school teacher of mine, which ignited my interest in reading books about war-time Hong Kong. Reading "Not the Slightest Chance" had a bone-chilling effect on me, and it makes me want to read more on the subject.

In sum, it was a 60,000 (Japanese) against 14,000 (HK Garrison) combat, with the latter comprising soldiers of all nationality: the British Middlesex Regiment, the Royal Scots, the Punjabis (India), the Rajputs (India), the Royal Rifles of Canada (Quebec), the Winnipeg Grenadiers (Manitoba) and the Hong Kong Volunteer Defence Corps. consisting of British, Chinese locals, Free French, Russians, Scandinavians and Americans.

The valiant men and women who sacrificed their lives (some suffering atrocious tortures in enemies' hands) either in action during the war or later in concentration camps in the defense of the Hong Kong population deserve our and our past generation's utmost and lasting respect and commemoration. The fact that the Hong Kong garrison (or at least the high-ranking officers) were well aware that Hong Kong was in an untenable position, but nonetheless resisted the Japanese invasion with dauntless courage, makes this part of Hong Kong's history especially poignant.

The book just makes me ponder as to why the Chinese Communists and Nationalists were conspicuously absent from the scene of the battleground. Hopefully other books about the 1941 battle that I’m going to read will shine a light.

Posted by Alice Poon at 3:14 PM No comments:

Brief Synopsis of My Novel and BigLychee's Plug

Brief Synopsis of "Fated and Fateless":-


"The story is set in colonial Hong Kong and spans four decades from the late 1940s.

Prior to October 1987, Wendy has her fill of bad experiences in her childhood and youth until she meets Tony, a Macanese magnate, and becomes his protégé. Despite her ascending career, her romance with Edward, her childhood playmate and Diana’s kid brother, suffers constant sabotage by Diana, who is also Wendy’s archrival by design. Meanwhile, Diana breezes through life and covets the throne of her father’s (Mr. Lee’s) property empire, but her heiress dream proves elusive. Her bad choice of lovers causes her more than a fortune and the love of her life turns out to be her cruelest life lesson.

In October 1987, Wendy and Diana finally come to a face-off when Wendy and Tony act in concert trying to take over Mr. Lee’s company, which attempt is foiled by Diana on a tip-off from a snitch. This reduces Wendy to ruins. At the same time, Diana discovers a startling secret about her mother which could change her fortunes forever."


“Don’t be fooled by the girly cover. Set in the 1950s-80s era, it’s (judging by the first few chapters) a tale of good versus evil, in which the rags-to-riches heroine works her way up into a position where she might be able to turn one of Hong Kong’s notoriously greedy, cheating real-estate empires into a force for social good, only to come up against a property tycoon’s spoilt daughter, who apparently comes to some sort of sticky end – hopefully, vividly portrayed and extremely unpleasant. It’s sort of Land and the Ruling Class: the Movie. There is possibly a dash of autobiography, as per a first novel; there are also plentiful resemblances to actual people, living or dead, which are of course entirely coincidental. Strictly for hard-core fans of Hongkongiana, obviously, though if/when it appears in Chinese, it could strike a chord like its non-fiction predecessor.”

I'll be posting an excerpt of the novel soon! Keep an eye on this blog!

Posted by Alice Poon at 3:24 PM No comments:

Paperback Edition of "Fated and Fateless" 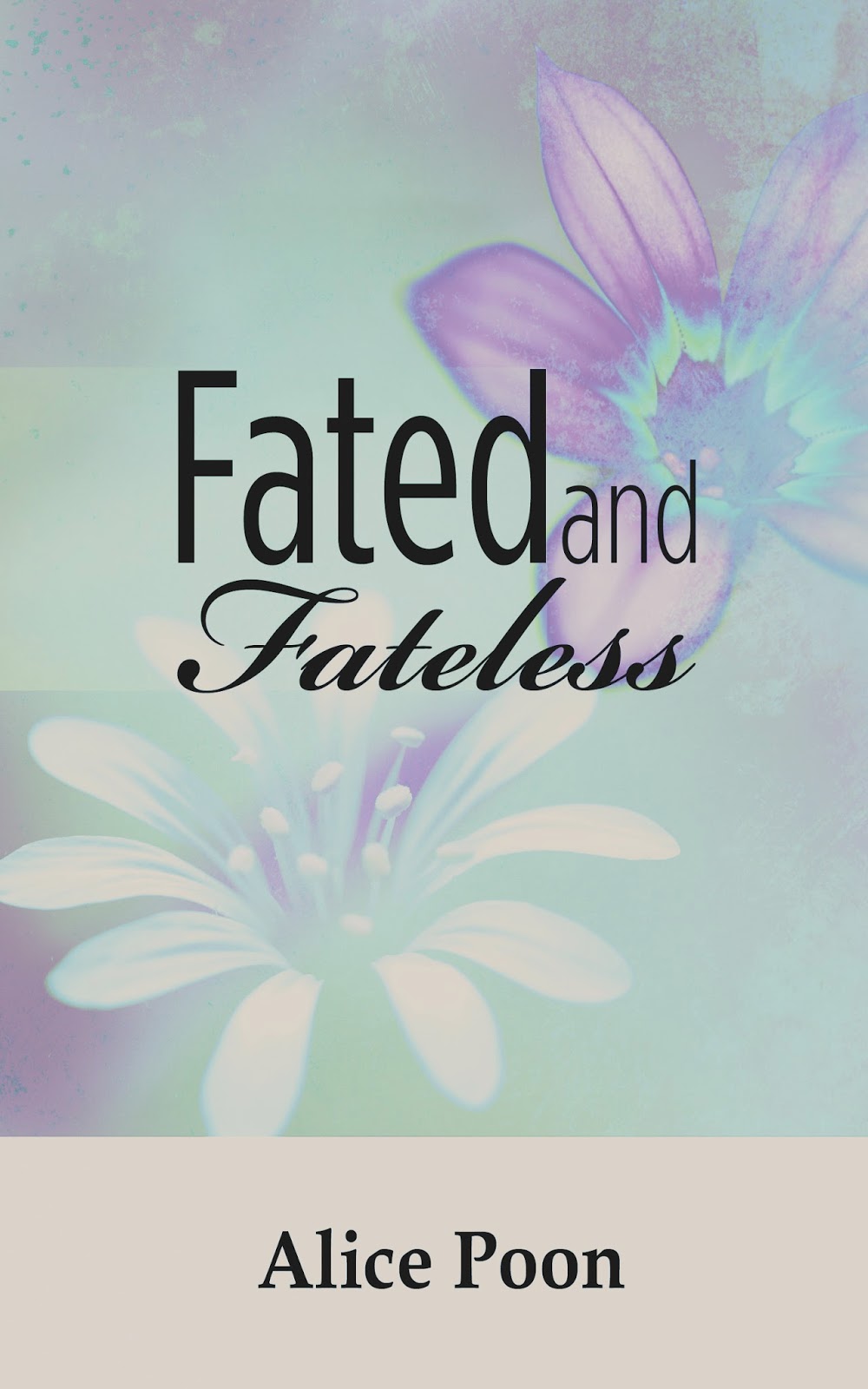 With the help of free online tools available at the CreateSpace Independent Publishing platform (an Amazon company), I was able to create a paperback version of my novel, which has just been launched on Amazon.com (U.S.), Amazon.co.uk (U.K.), Amazon.fr (France), Amazon.de (Germany) and other Amazon European sites. Obviously, print-on-demand technology has been instrumental in helping debut fiction authors who are constantly crowded out of the market to get published at no cost.

In about six to eight weeks' time, the paperback version will be accessible by bookstores, online retailers, libraries and academic institutions.

Link to the Product Page on Amazon.com

Link to the Product Page on Amazon.co.uk

Link to the Product Page on Amazon.fr

Link to the Product Page on Amazon.de

I have to admit that I am one of those book readers who still prefer to hold a physical book in my hands and feel the pages while turning, rather than just gluing my eyes to a screen.