At long last my author copies of Tales of Ming Courtesans have arrived! Paperback shipments, whether from the distributor or retailer, have been moving at snail pace due to reduced working capacity brought on by the pandemic.

If you're located in North America and ordered paperback copies from Amazon or other online retailers and have not received them, please be patient. They should be on their way to you!

If you're in Asia, the quickest way may be to purchase copies (by email) direct from Earnshaw Books at this link. Copies will also eventually be available at Hong Kong retail bookstores.

For folks located in Europe and the U.K., please note the release date is August 28, 2020. 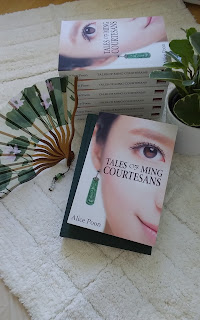 Email ThisBlogThis!Share to TwitterShare to FacebookShare to Pinterest
Labels: Tales of Ming Courtesans

5-Star Reviews of "Tales of Ming Courtesans" on Amazon


I'm humbled by these 5-star readers' reviews on Amazon.

These two are from Sara and Ralph Lowen. As Ralph so rightly pinpoints one major theme, my novel is basically about oppression of women. And if you want to take a virtual tour of 17th century Jiangnan (including Nanjing and Hangzhou), then this is the right read for you!

This is novel #11 in the Rougon-Macquart series and was the 6th one in the series I had read so far (all selected at random). It so happened that all six are set in Paris. The Ladies’ Paradise (Au Bonheur des Dames) is one where Zola is unwontedly light-handed with his prescription of human misery.

This novel tells how a country girl Denise tries to settle in the glamorous city of Paris and courageously confronts all the mishaps and humiliation that her job as a junior saleswoman in a prestigious department store entails. She witnesses how the innovative business model allows the establishment to grow from strength to strength under the management of the shrewd and handsome owner Octave Mouret, who is a young widower and womanizer. Her strong common sense, integrity and strength of will become her only tools of self defense in the material world filled with degrading temptations, to which most of her co-workers succumb. The worst trial comes when she realizes she has fallen in love with Mouret who, tired of his own dissolute private life, is deeply attracted to her.

As the backdrop of the story, Zola paints a living picture of how the business of a luxury department store is run on a daily basis in mid-1800s Paris and how a rapacious expansion plan is carried out in tandem with the city’s ambitious massive infrastructure development. Beneath all the glamour though, there is a strong undertow that grieves the inevitable demise of small business shops and afflictions of their owners. The story also gives a realist’s glimpse into the lives of the average salesman and saleswoman employed in high-class department stores.

This novel is said to have been inspired by the development of Les Grands Magasins du Louvre in the Place du Palais-Royal of that era.

As with other novels in the R-M series I’ve read, Zola shows the same mastery in this one with his descriptions of minutiae. What I liked even better though, was still his keen insight into the human psyche and interpersonal relationships, and how he captures the social paradigm shift of the times. I feel that at heart he was very much a democratic socialist.


I am most grateful for the opportunity to chat with the talented Elaine Chiew on Asian Books Blog about Tales of Ming Courtesans. The Blog is an authoritative voice on Asian literature and Elaine, an established author herself, made some keen observations about the book and asked the most discerning questions!

Link to the full interview.

The Vancouver Sun asked me some soul-searching questions in the interview about my new historical novel Tales of Ming Courtesans.

Link to the Full Interview


It is Day #6 to book release in the U.S., Canada and Asia, and I woke up to this electrifying review on Gwendalyn's Books Blog!

Please allow me to share the salient part of the review:

"This eloquent saga is steeped in real life historical people, living in the turbulent times in between the Ming, and the Qing dynasties, where social classes were defined and woman had little or no voice of their own.

Tales of Ming Courtesans is a richly textured, mesmerising and captivating story that is full of rich history and the most compelling and intriguing characters.....

I can see why this talented author is loved by so many. Poon’s appealing way of weaving fact and fiction, along with her absorbing seamless narration. This is a book that you will find yourself contemplating the lives and struggles of these memorable women, long after you close the book.

A meticulously researched book that captures the historical elements and traditions of the Chinese people. This is a masterpiece of a tale, that depicts the economics and the cultural mind set that was placed on woman during this era. The resilience and the quiet but powerful strength, that these ladies show within the book is nothing short of motivational.

The plot twist with betrayals and longing and much heartache. Poon knows how to transport the reader, with her richly descriptive atmospheric imagery. The lush and vibrant, historical world building is stunning. An emotional book that is quick paced from start to finish."

This review makes all my hard work worthwhile :)


The Historical Fiction Virtual Book Tour for my new novel Tales of Ming Courtesans starts today and will continue until June 12, 2020.

Entries are now open for a paperback giveaway. Enter to win a copy!

HFVBT Book Tour Page (scroll down to near the bottom)