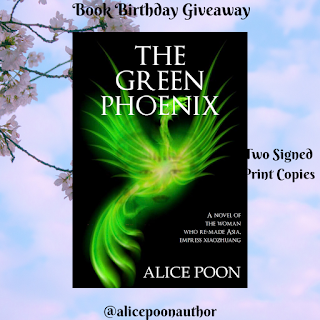 Please use the contact form (on the right) to enter your name and address for a lucky draw on September 1, 2019.

Posted by Alice Poon at 2:39 PM No comments: Links to this post

Email ThisBlogThis!Share to TwitterShare to FacebookShare to Pinterest
Labels: The Green Phoenix 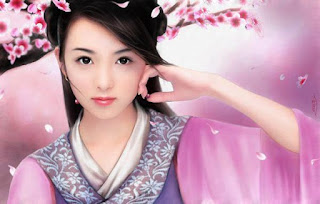 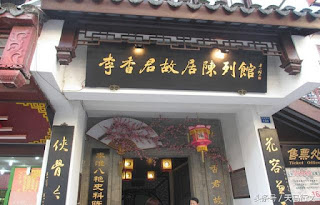 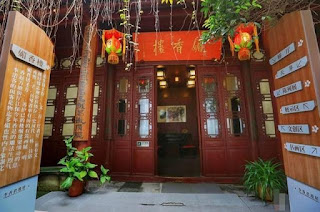 As I previously mentioned, Li Xiangjun 李香君 (1624 – 1653) is one of the three leading characters of my upcoming novel. She was among the Eight Beauties of Qinhuai 秦淮八艷 and the subject of Ming scholar Hou Fangyu’s 侯方域’s literary essay titled Biography of Lady Li 李姬傳.

The premises where Li used to reside and ply her trade as a courtesan (she was a celebrated kunqu opera singer) were called Villa of Alluring Fragrance 媚香樓, which was located along the banks of the Qinhuai River, a glitzy pleasure district of Nanjing in the late-Ming dynasty. The above photographs show the reconstructed building at No. 38, Bank Note Vault Street, Qinhuai, Nanjing 南京秦淮區鈔庫街三十八号.

If you have read Kong Shangren’s 孔尚任’s iconic historical play The Peach Blossom Fan 桃花扇, you would already be familiar with the real-life heroine Li Xiangjun. This classical play is a dramatized narrative based on Hou’s essay Biography of Lady Li and is a poetic weaving of the tragic love affair between Hou and Li with the collapse of the Ming dynasty.

I’ve recently stumbled across a poem written by renowned writer and philosopher Lin Yutang 林語堂 (1895 – 1976), which gives a reflective and laudatory description of Li Xiangjun’s character, with gibes targeting men in general. He inscribed this poem on a scroll portrait of Li Xiangjun that he had privately commissioned.

Xiangjun is a woman, her blood spilt on the peach blossom fan.
Her moral virtue lights up history, and shames the macho men.
Xiangjun is a woman, and she has grit aplenty.
I have her painting hung on the wall, to teach me humility.
Take a look at all the men, is there any with intrepidity?
They’re all wishy-washy; what have become of them!
The world these days, is filled with crooks and shams.
I can’t go wrong admiring, beauties in a distant time-span.

Posted by Alice Poon at 11:34 AM No comments: Links to this post


A breezy and concise historical account of Russia’s last imperial reign of Tsar Nicholas II, this non-fiction history book reads a lot like a novel.

Like with many other similar stretches of history, when viewed in retrospect, the course of events would seem to be so natural and predictable that it makes one wonder, had things been handled with more compassion and less hubris by those in power, if the odds of averting tragedies and disasters could’ve increased.

The Family Romanov gives an intimate account of the lives of the Romanov family members, namely, Nicholas, his wife Alexandra, and their four daughters, Olga, Tatiana, Marie and Anastasia and one son-and-heir Alexei. The account starts with the 1884 courtship between teenagers Nicholas and Alix of Hesse (who was Queen Victoria’s granddaughter), and carries us through to the tragic end of the whole family in July 1918.

Juxtaposing narratives of the opulent, hedonistic lifestyle of the Imperial family side by side with anecdotes of the peasant class’s everyday scourge of abject poverty, oppression and despair, the author presents a poignant picture of two diametrically opposite worlds, worlds inhabited by two classes that are distinguished by birth and destiny. Exaggerated sense of entitlement and obtuseness of the privileged ruling class becomes the cause of its own ultimate undoing.

I’m just puzzled as to why the French-educated Romanovs had not learned from the downfall of Louis XVI and Marie Antoinette.

It is interesting to note that it was not until July 2007 that the remains of Alexei and of one of his sisters were finally found. (The remains of the other five family members had been uncovered in 1991.)

Posted by Alice Poon at 9:12 PM No comments: Links to this post